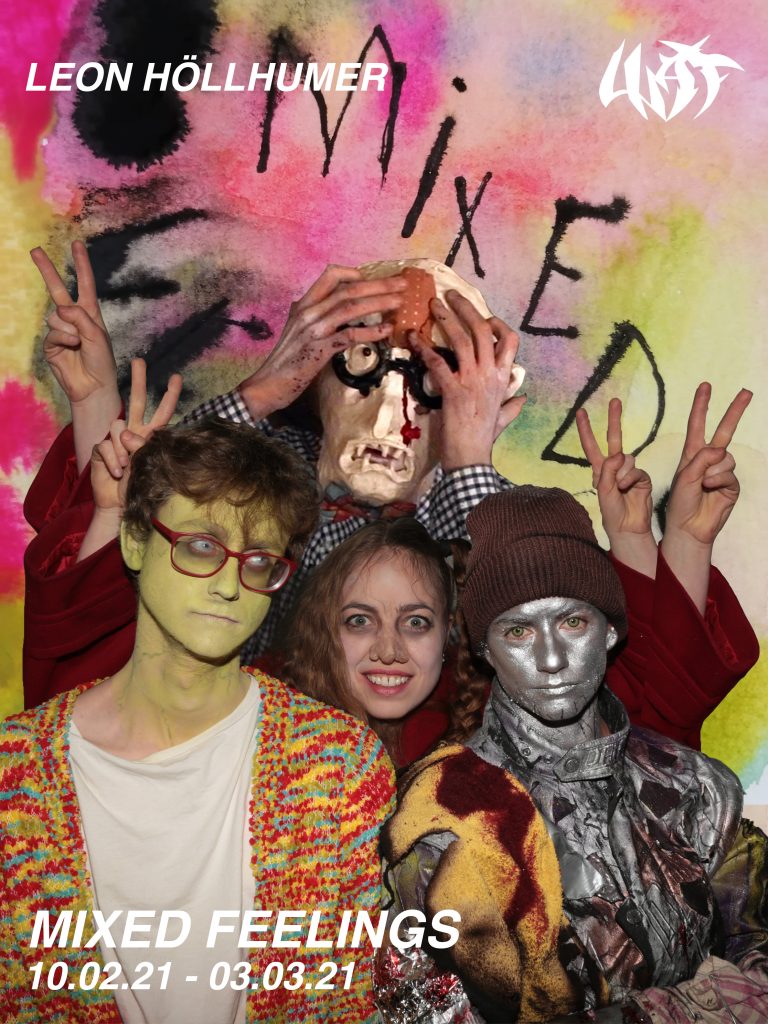 Mixed feelings was collaborative multimedia solo show at the Viennese WAF Galerie that included photography, film, installation and performance. The center piece, exhibited from the opening on, consisted of the screening of the short film Sandras WG, an avantgarde thought experiment in which a human, a fabulous nature being, and a cyborgesque creature live together in a shared flat. Furthermore, large format photography of/and ceramic sculptures evoked dystopic present or near-future landscapes. There are three wasps, equally beautiful and scary. Are they cyber-infected or biotech gone astray? Are they biomechanical pollinator drones? There is a nutritional pyramid, however seemingly inorganic and leaden, which raises questions about the globalized industries and the food sovereignty. Further, an exaggeratedly militarized police man lurks in an apocalyptic, rural surrounding like a feral cat. A silvery person (or is it a human person?) peers out from a manhole. In the same space, the ground floor of WAF Galerie, ceramic props, musical instrument and masks were scattered between the artworks and already gave a hint at the second major part of Mixed Feelings that grew progressively and collaboratively during the whole time period of the exhibition from February 10th to April 3rd 2021: Under the pseudonym and in the role of Basil Fischler, the artist organised five DJ sets and five live concerts that took place in the installation setting that the solo works generate. Additionally, Basil Fischler, a fictitious and very quirky freelance curator, called for proposals for a group exhibition in the basement of the gallery, which eventually grew to an ‘exhibition inside the exhibition’ with 41 contributions that opened in the second week of Mixed Feelings. The participating artists were between 15 and 60 years of age and in various stages of their careers; for some, this was their first contact with the art scene of Vienna. The artist, or rather his alter-ego Basil Fischler, was constantly present in the space and performed daily, together with guests. The costumes and masks, showing different states of emotions of this extremely quirky figure, were never hidden, but simultaneously present which bestowed the character changes a psychological component. In a similar vein, Mixed Feelings generally mirrored, made transparent and sympathetically mocked the procedures behind the ‘production’ of an exhibition; on the one hand through the open organization of the group show, on the other hand through the omni-presented props and masks that again and again transformed the space and the performers magically and at the same time unceremoniously. As such, Mixed Feeling ended up being an exhibition on two levels, stage and set, workshop and wardrobe, band rehearsal studio and a strange, sometimes dark, always funny field of experimentation. 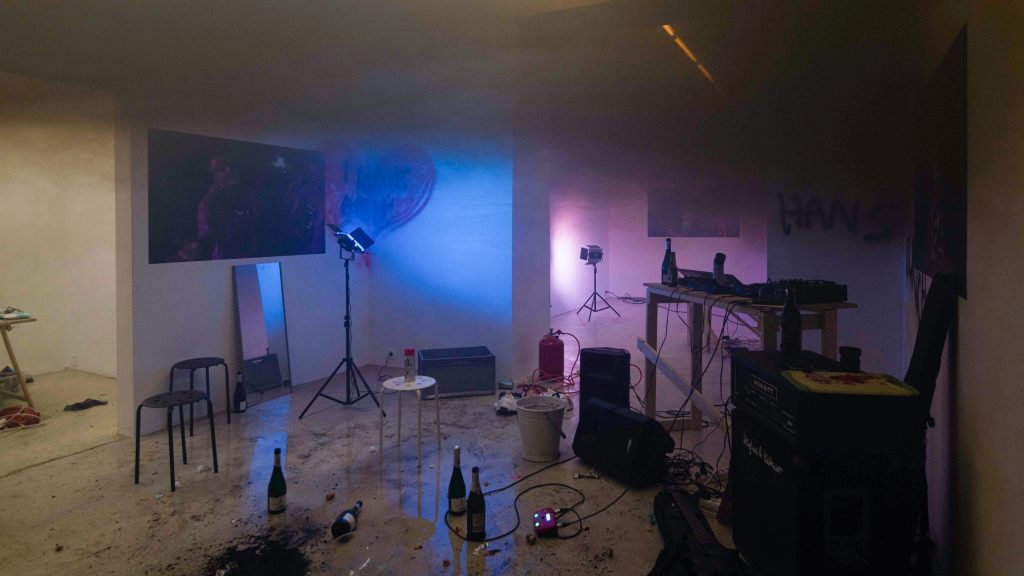 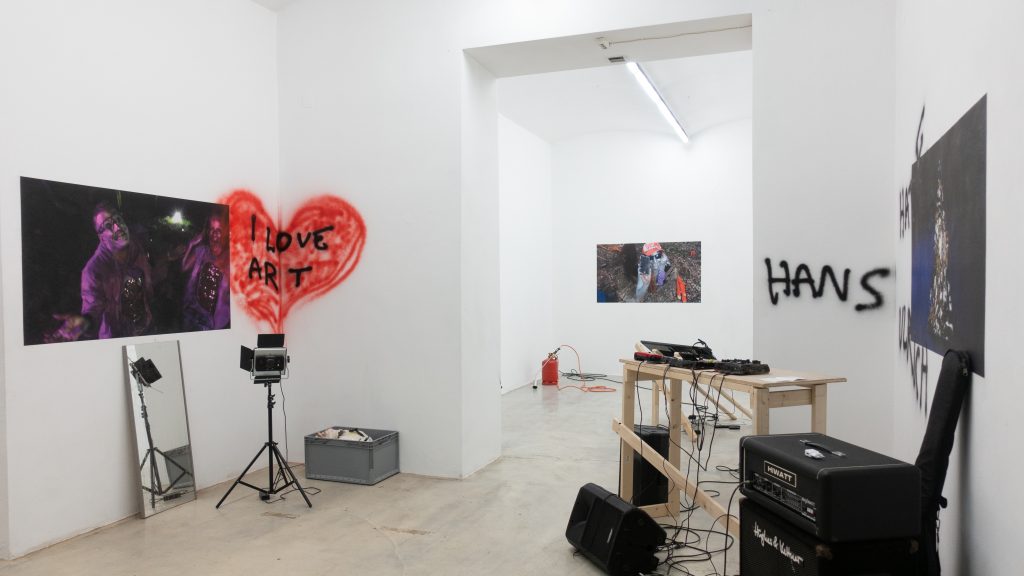 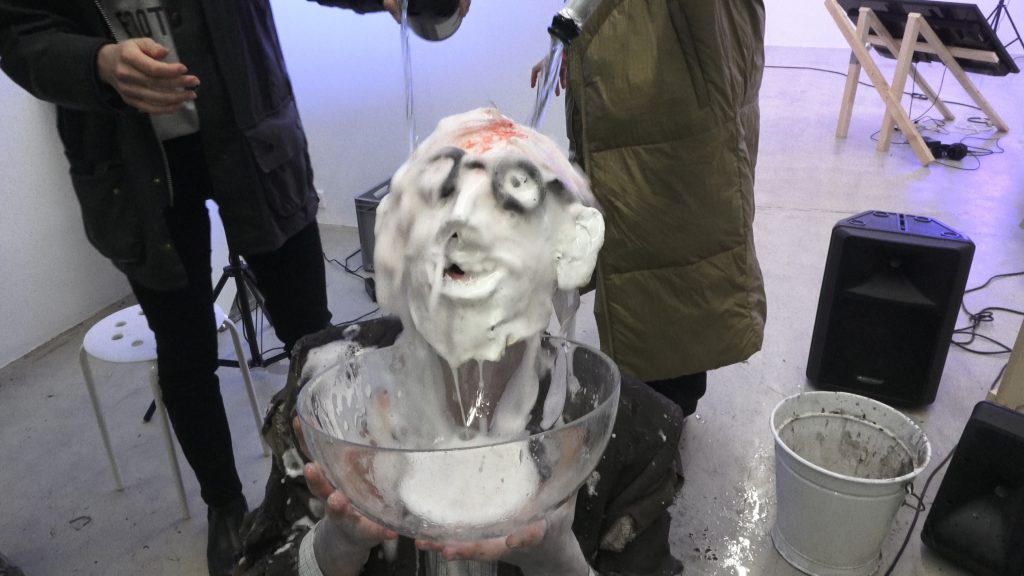 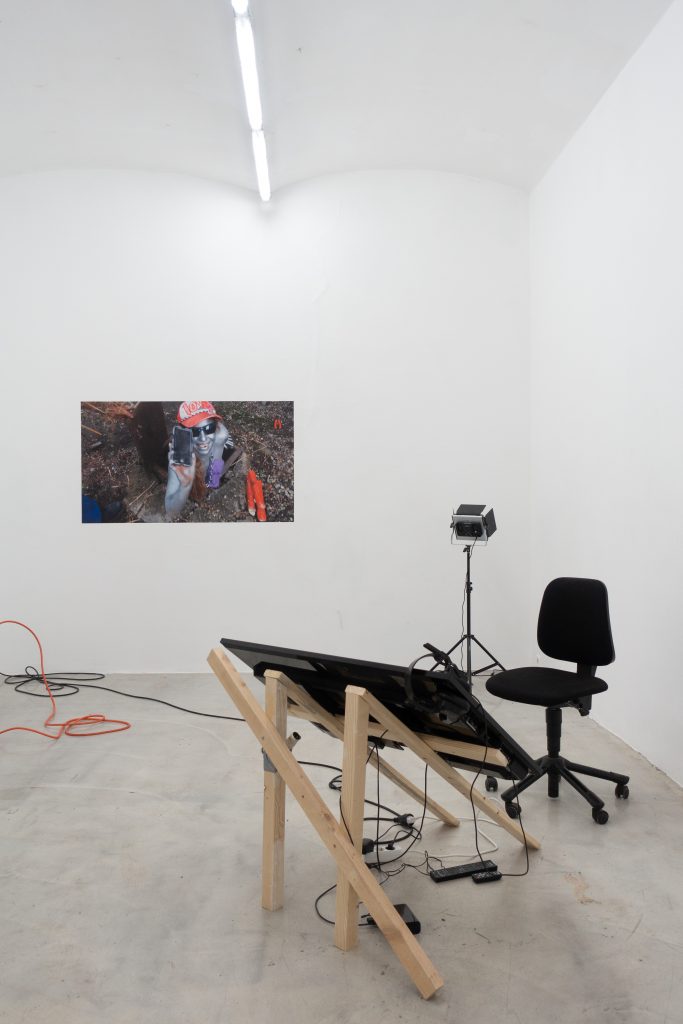 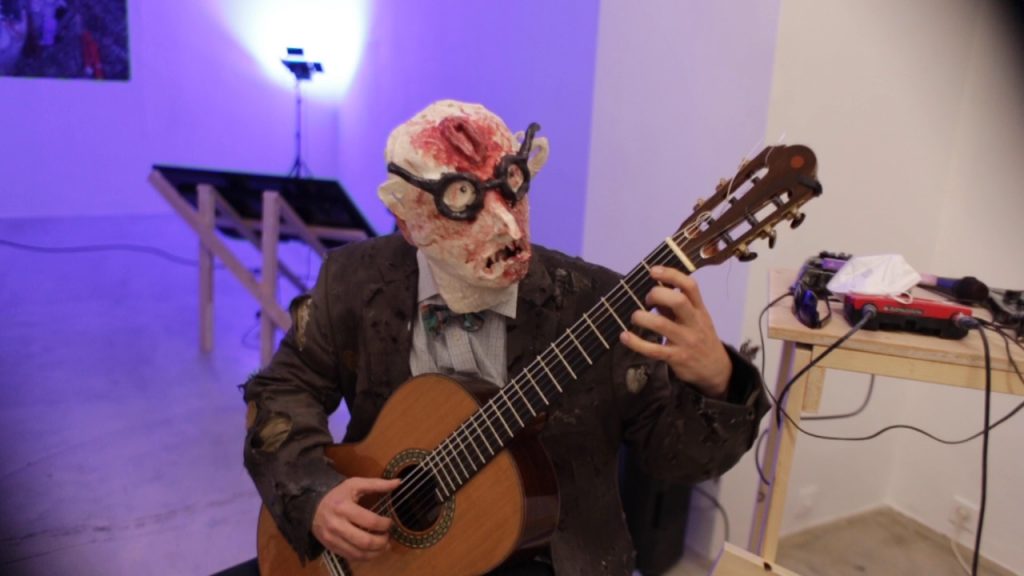 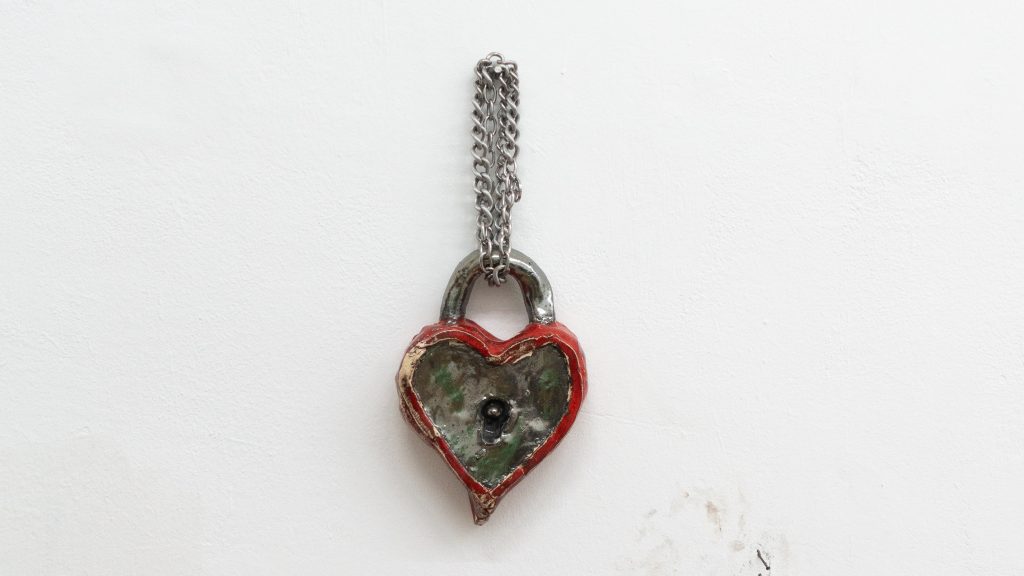 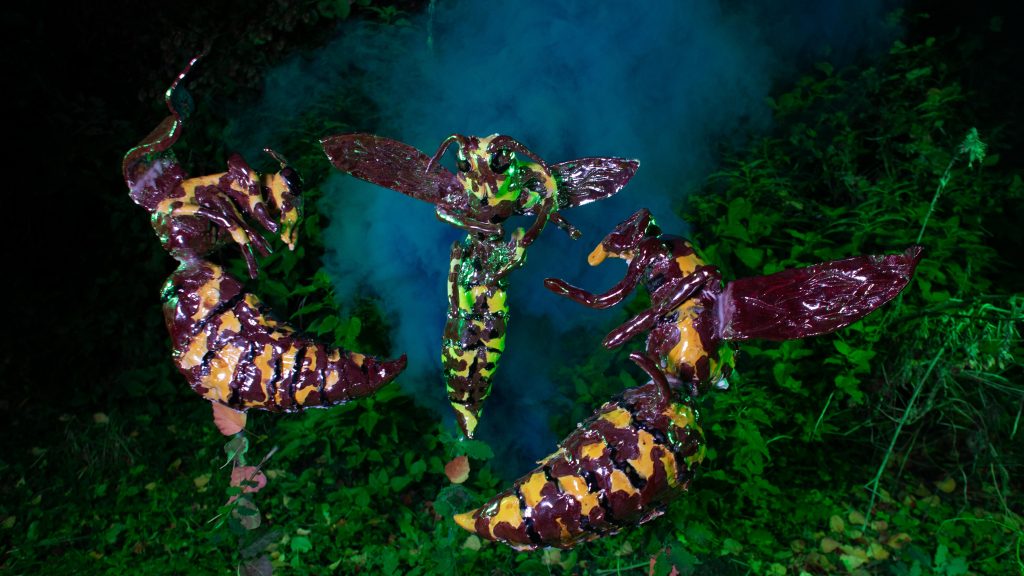 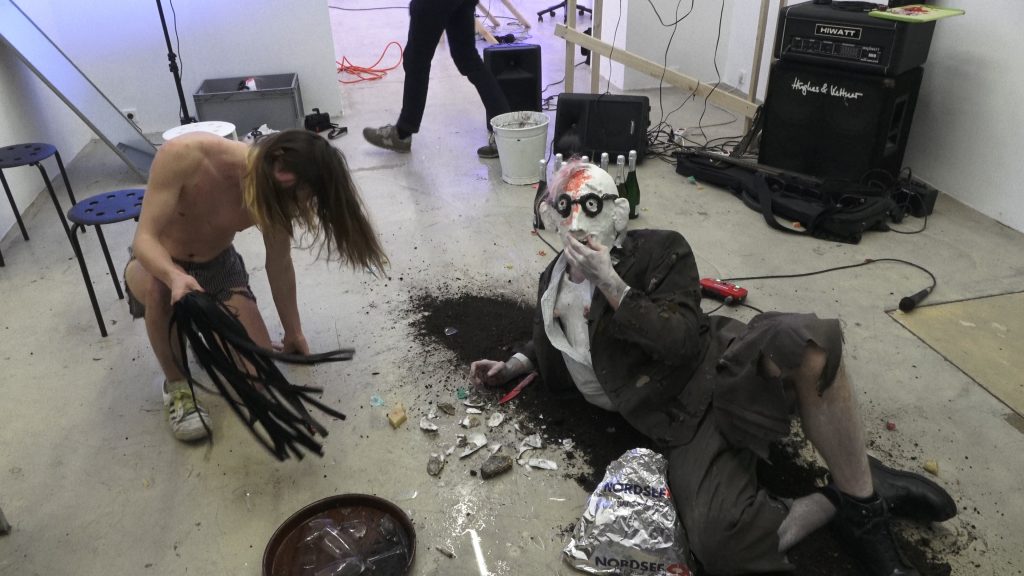 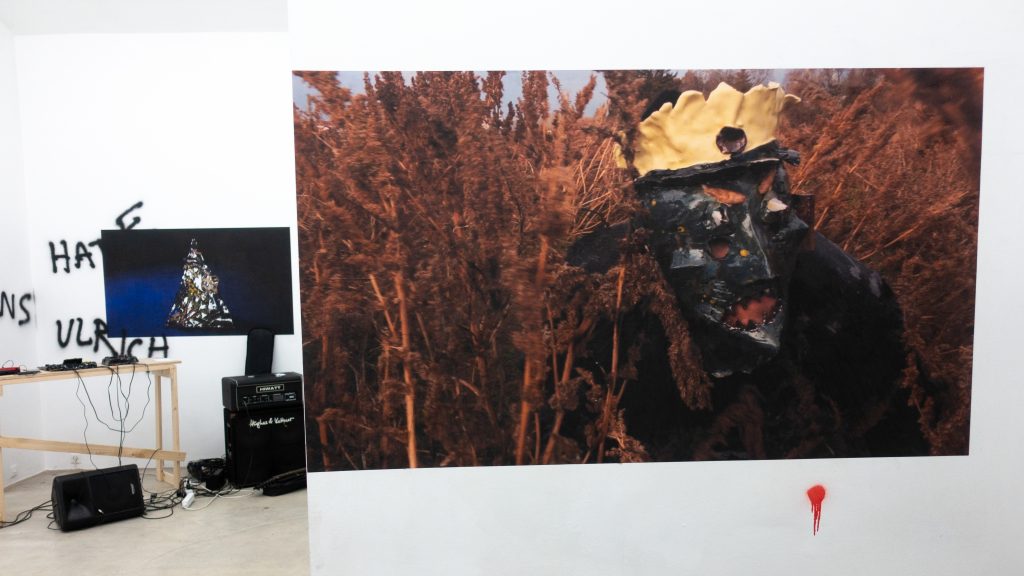 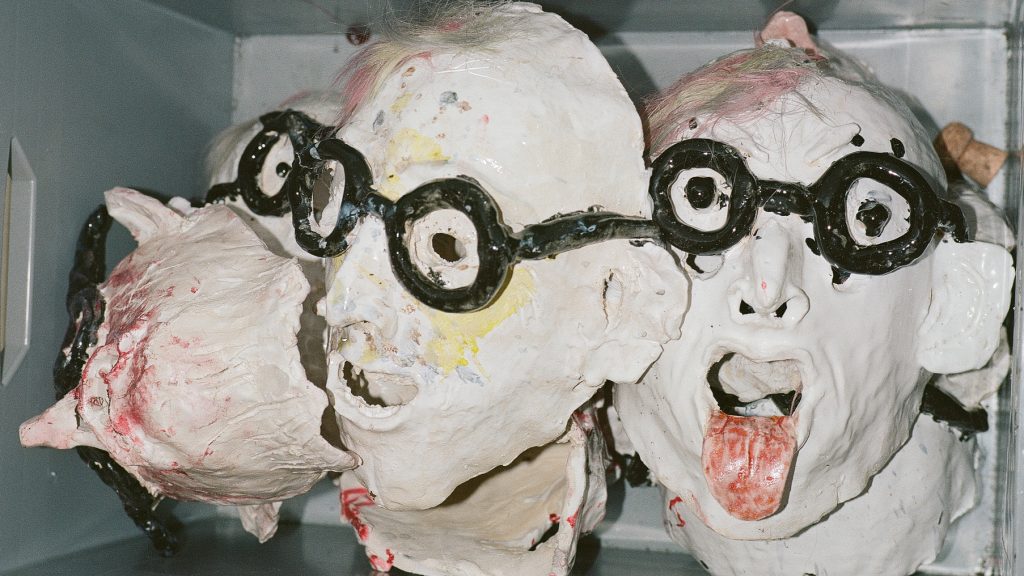 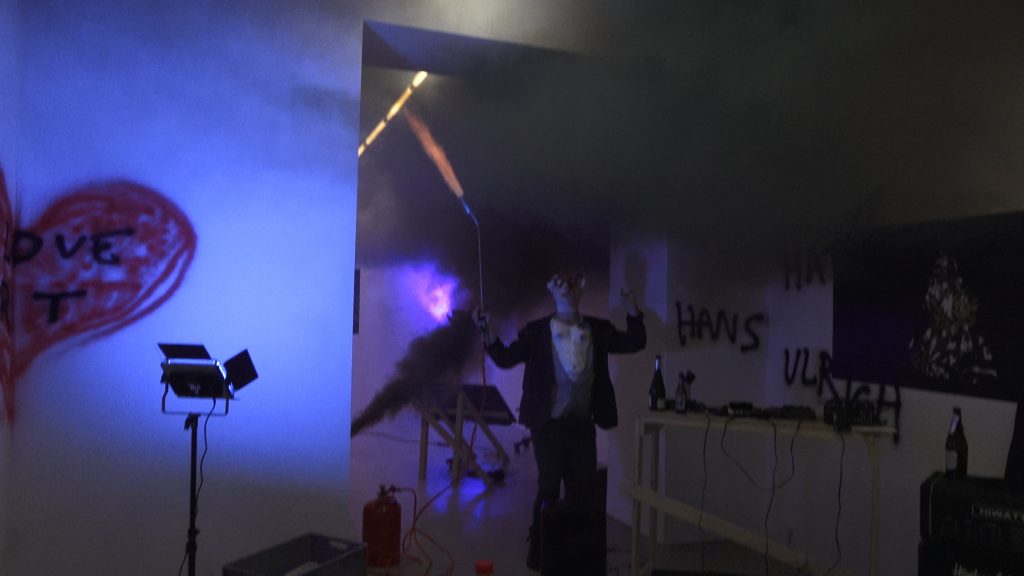 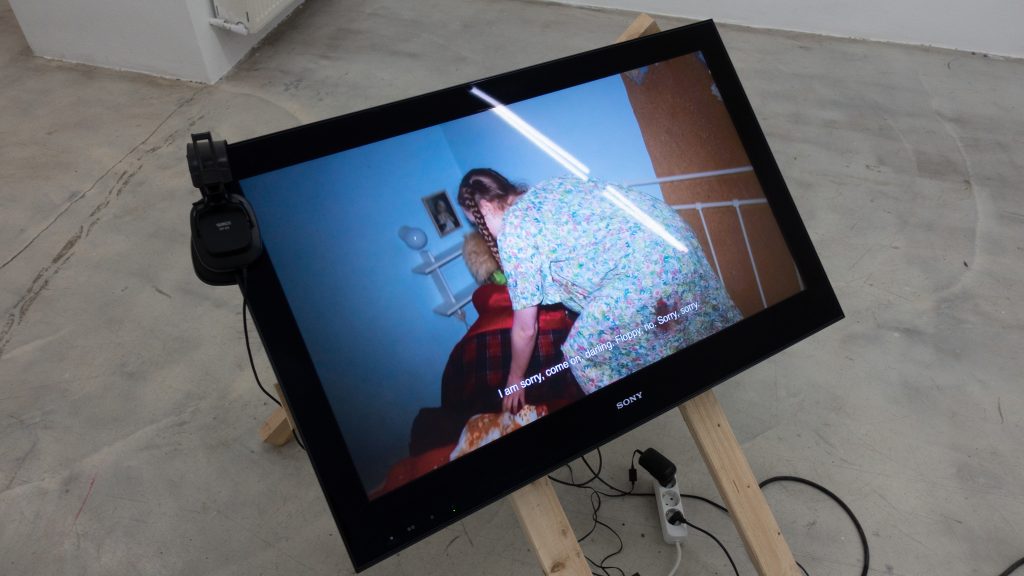 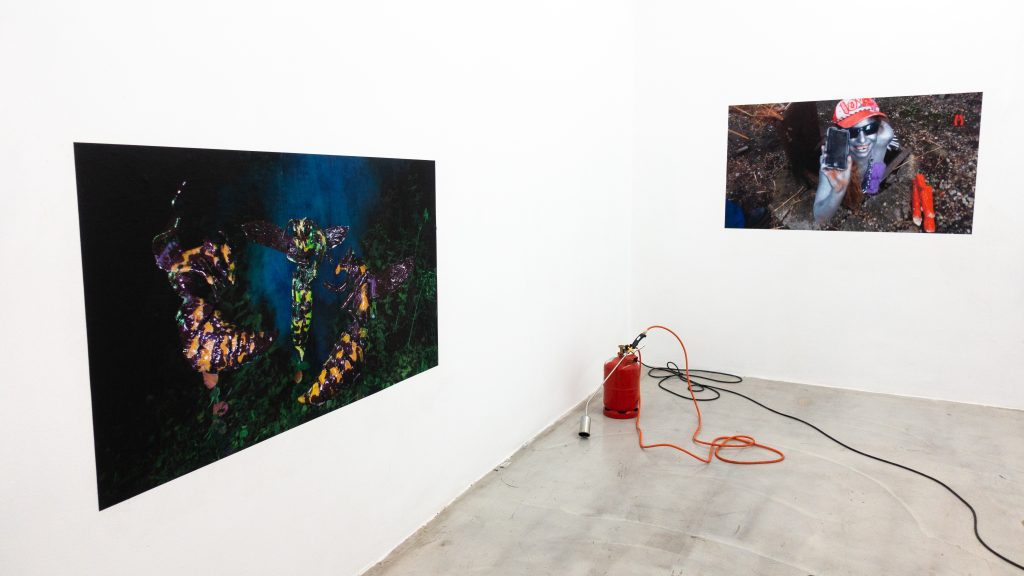 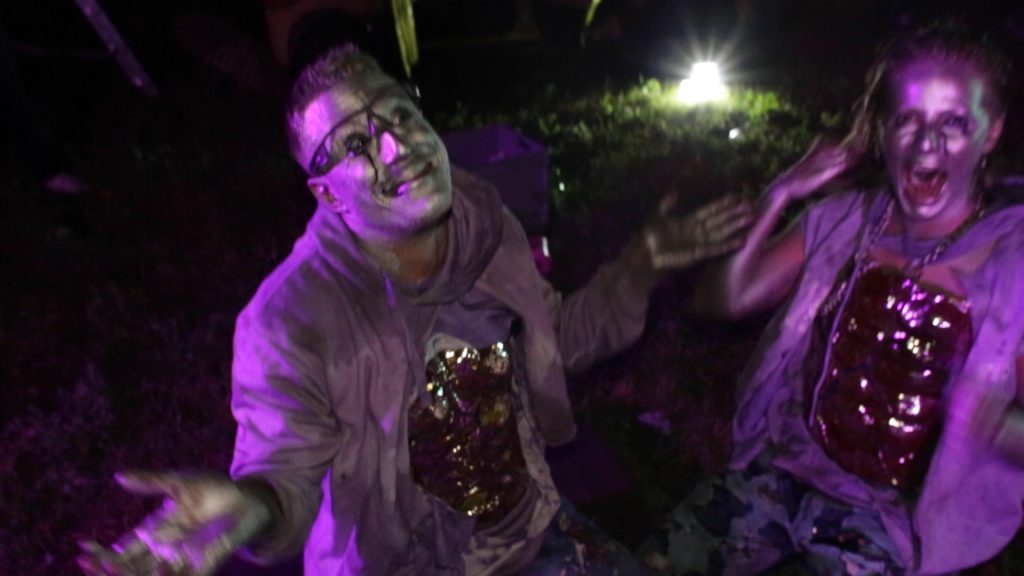 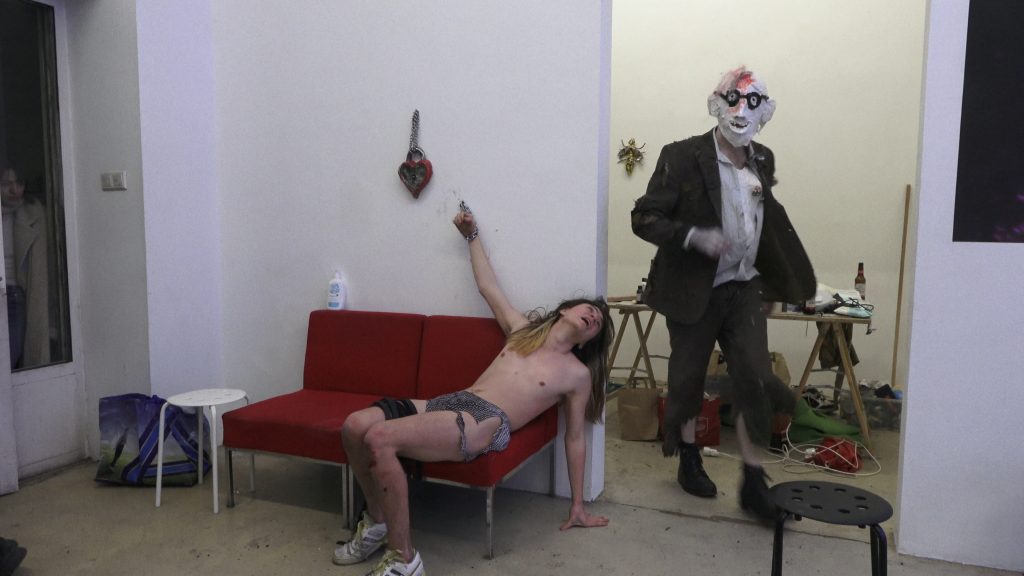 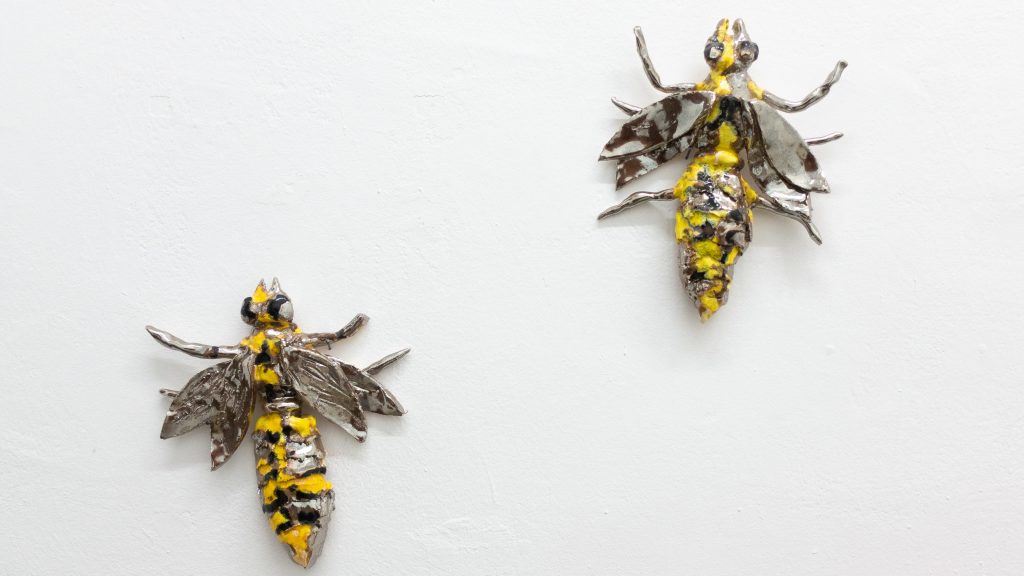 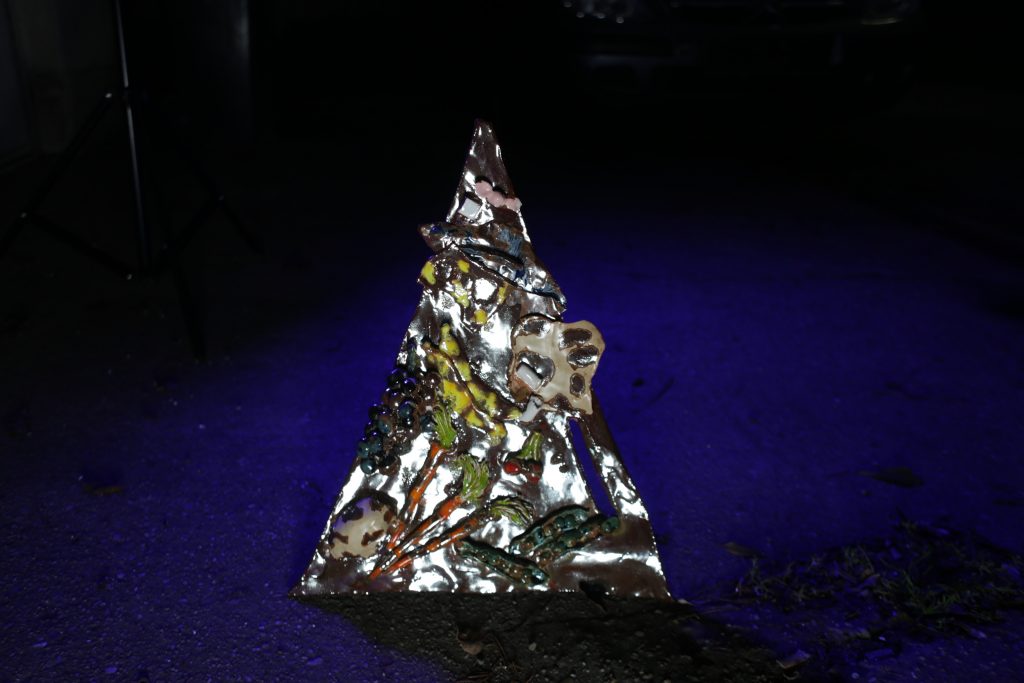 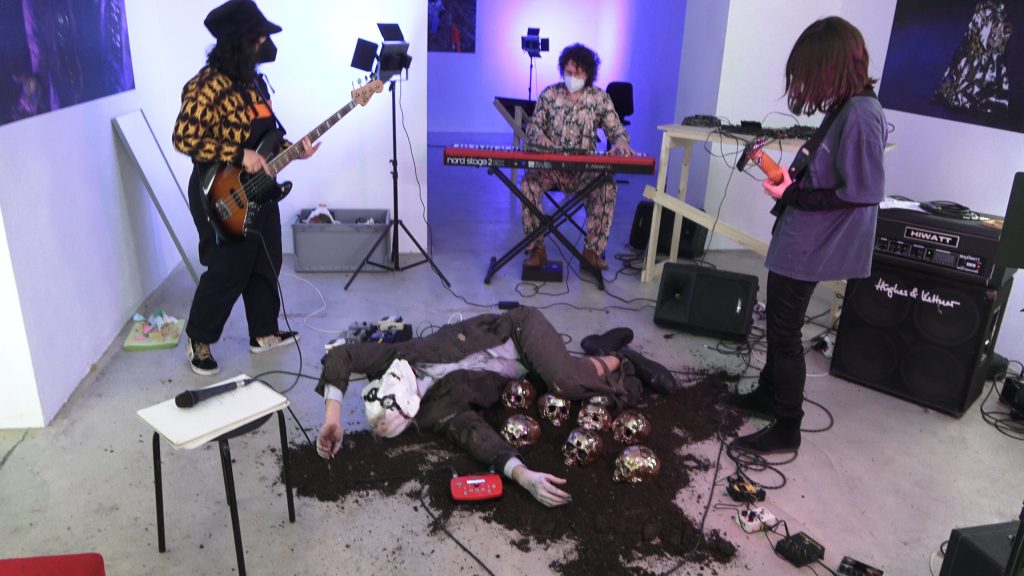 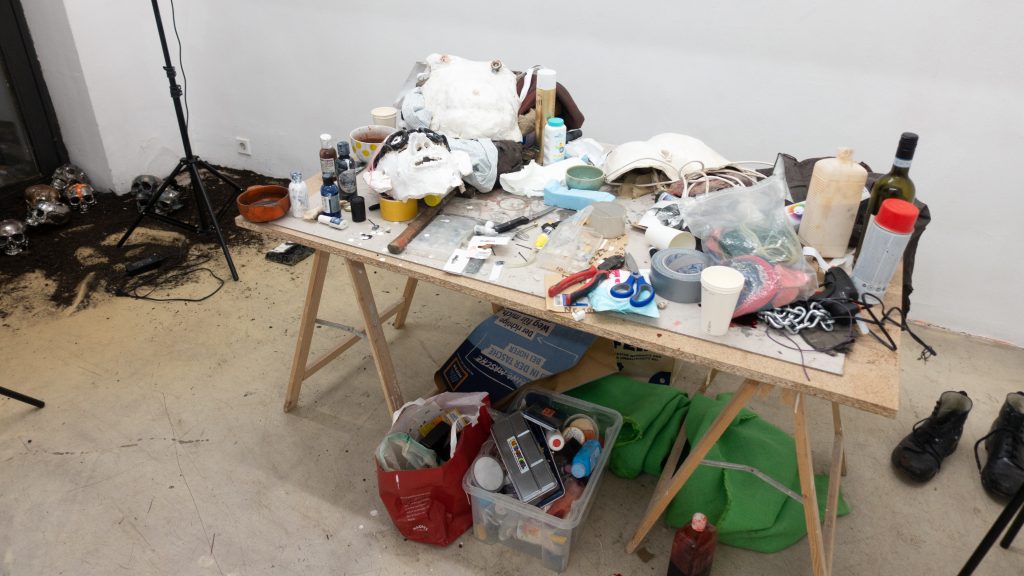 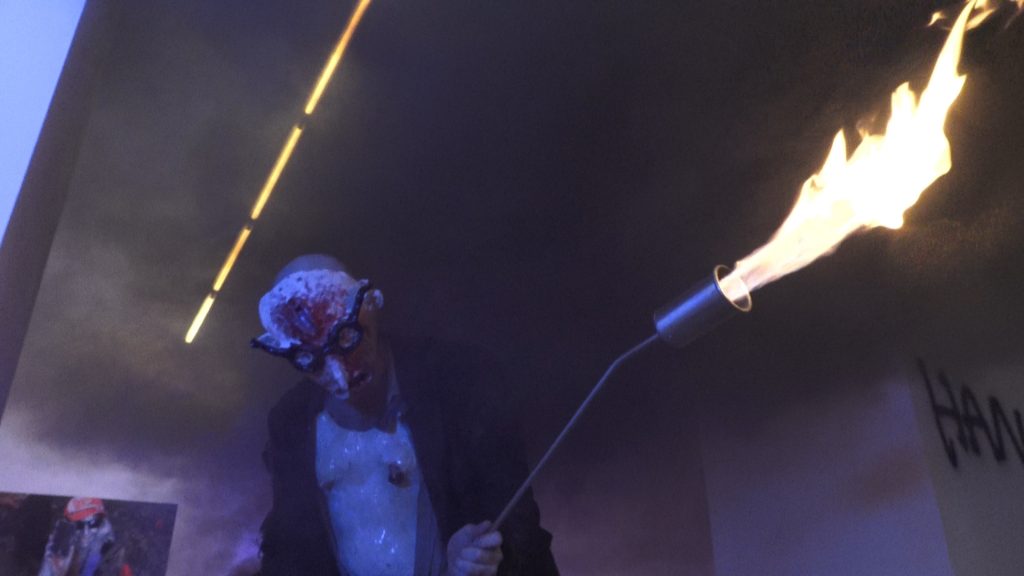 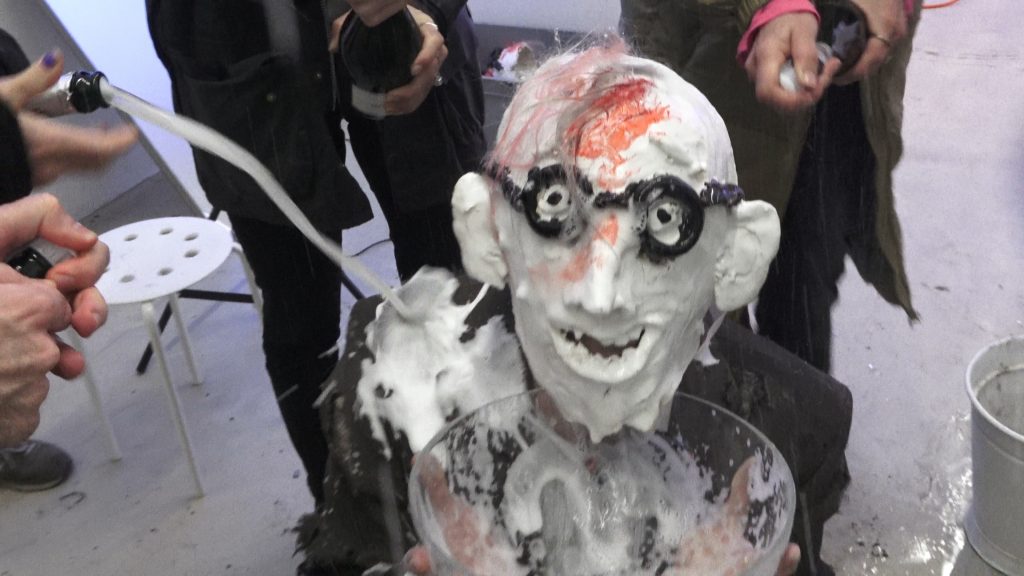 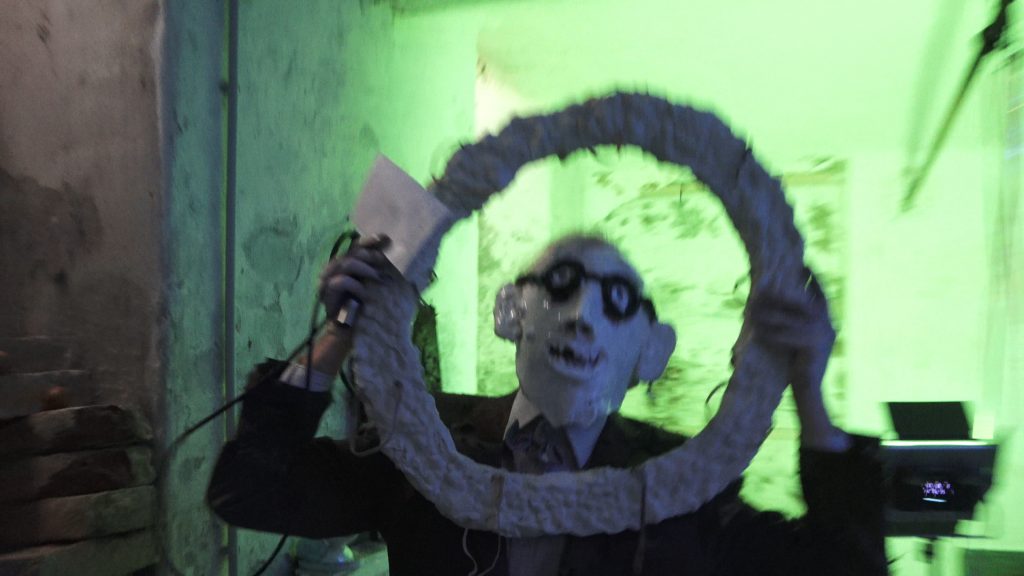 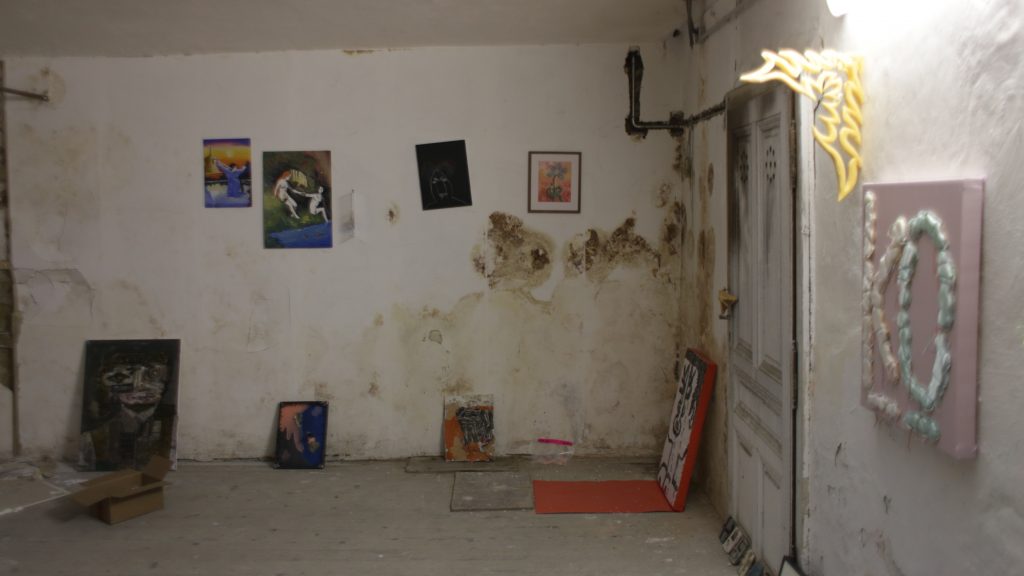 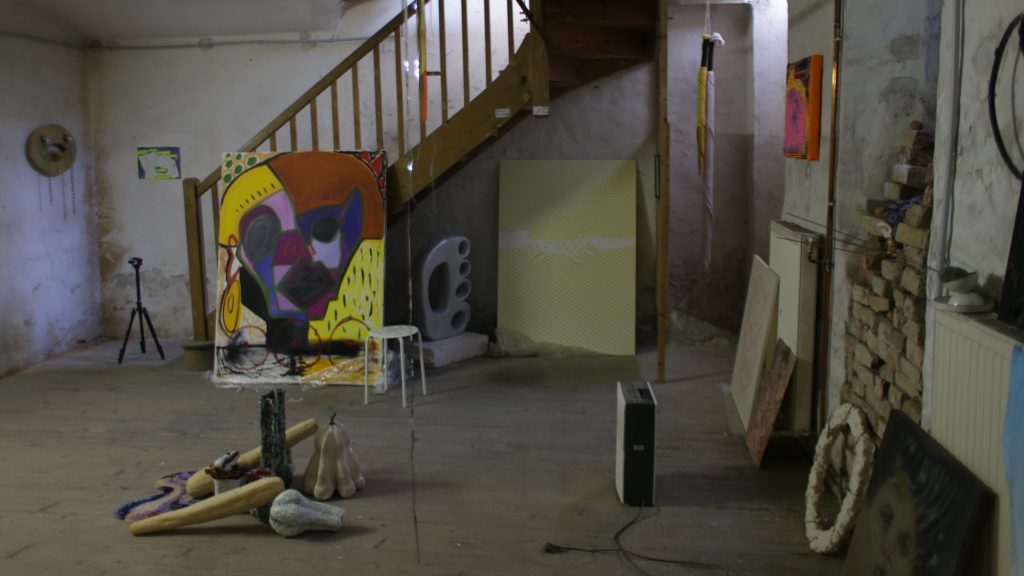 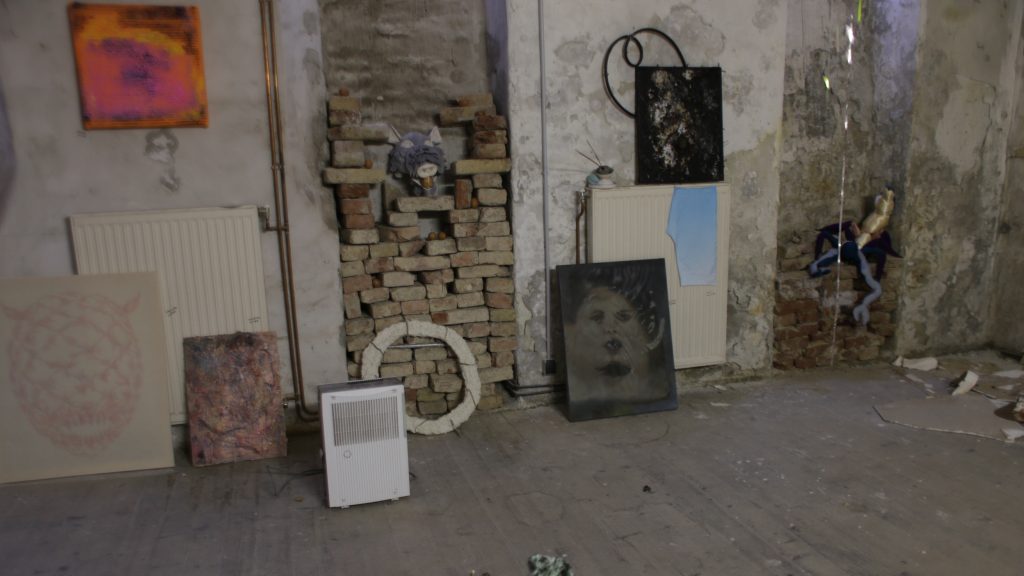 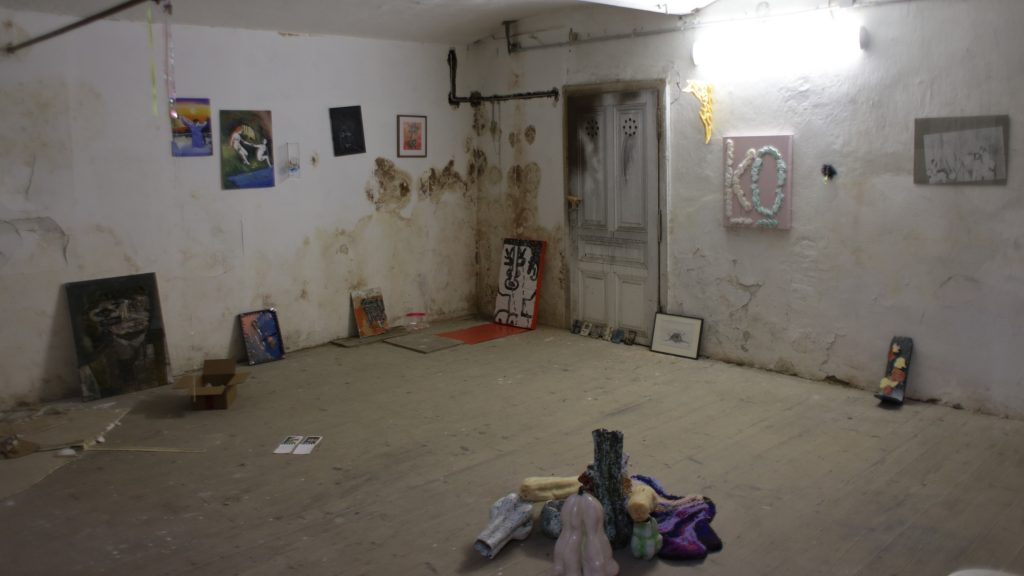